Professor ST Hettige on the educational crisis induced by Covid-19

Despite all of its own flaws and drawbacks, the ongoing pandemic has managed to bring to light many inconsistencies and flaws in many systems. There are ongoing discussions about reforming the social system and the education system, and this has changed the way companies approach their work. So, despite all the trials we are forced to go through in these difficult times, there can still be hope for humanity. 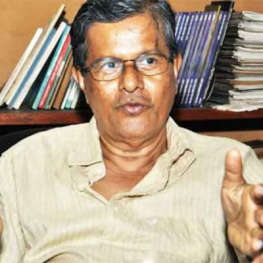 Speaking to the Emeritus Professor of Sociology at the University of Colombo ST Hettige, he revealed several issues in our education system that emerged after the pandemic.

“Many of the problems in our country today are largely due to lack of public awareness. There is a link between education and democracy that most don’t see, ”he said, adding that the education system can only work if those in charge are aware of what they are supposed to be doing.

Emphasizing the importance of solving a problem, Prof Hettige explained that the government should not just act on one person’s word, but rather look at the problem itself and work on the best reactive action to eradicate the problem. This means of understanding is not something that comes naturally but over years of learning and participating in a school environment, which, as he pointed out, is not available to children who are currently studying because they cannot physically go to school or university.

“The generally positive impression that many people have regarding the country’s achievements in the education sector and the many deep-rooted issues have persisted for a long time,” he commented, noting that some of the changes that have taken place held in recent decades have not necessarily been for the best. In this regard, the widening gap between the most cherished ideals and goals of education on the one hand and the actual education situation on the other is most important.

Changes in the system

Sri Lanka’s modern education system has evolved over several decades, even dating back to colonial times. Professor Hettige explained that Kannangara’s famous educational reforms in 1945 led to the overhaul of the education system of the time, making it more streamlined, democratic and fair. But, over the past 70 years, it has undergone many changes, depending on the economic, social and cultural policies adopted by successive governments. After 70 years of free education, Sri Lanka has completed the Kannangara program, which has achieved high performance in socio-economic indicators. “Now the time has come for Sri Lanka to move beyond the Kannangara agenda to ensure that Sri Lankan children and youth are provided with a 21st century skills-based education,” he said, explaining that although Sri Lanka has high performance in terms of internal efficiency of education system, external efficiency is low due to heavy academic and exam-oriented education and neglect in skills development.

“The 21st century learning environment requires generic skills as a learning outcome. Education reforms must address the issue of developing an innovative curriculum and authenticated learning and assessment systems to ensure that 21st century children are successful.

Sri Lanka to acquire generic skills and to be able to do things rather than just having the knowledge of things without any skills to accomplish.

As is widely discussed today, school education is narrowly conceived and largely limited to the acquisition of knowledge, often of an instrumental nature, through school instruction. This is accompanied by participation in memory test exams. All of this leads to neglecting the larger and deeper goal of education of producing a well-rounded person who possesses multiple skills and attributes.

Unfortunately, since independent learning has never been part of our education system, as Professor Hettige said, children today find it very difficult to learn online.

“If you go to school, or even university, you will see the students vigorously taking the notes that the lecturer writes on the board. Instead of listening and understanding, they chose to memorize, which in the long run does not benefit anyone, ”he commented. He explained that if we had created the space for independent learning, today we wouldn’t see a decrease in what students can grab when their classes are held online.

The best society is one with well educated citizens. Professor Hettige said this has limits: “A well-functioning society would not be made up entirely of academics or academics; those who govern society do not need to stay in formal education until their forties. The experience of life, however, takes many forms; and it is possible to be overeducated. “But we must strive to educate as many of our citizens as possible until at least until early adulthood, in school, and then through whatever form of higher education they might choose to pursue. thereafter, “he continued. He also observed that modern society cannot make rational choices, so it is currently up to the government to do so, but in the future, children should go through a process of independent learning in order to harness this skill and d ‘hope for a better future. .

Professor Hettige believes that beyond the education we receive before and in early adulthood, when people can and should enroll in continuing education courses, they should, more importantly, continue to train. It requires independent learning skills and draws attention to perhaps the most obvious reason why independent learning skills are important: if one continues to learn throughout one’s life, one must be able to do it without depending on a teacher.

On the one hand, the pandemic has disrupted the school system and universities, although steps have been taken to organize classes and other online activities despite the serious challenges many students face in securing access to such programs. On the other hand, some persistent problems within the education system have given rise to public unrest on the part of teachers’ unions and others. “While these issues need to be resolved quickly in order to create the minimum conditions necessary for the functioning of educational institutions, there are also long-standing issues that need to be addressed through educational policy reforms and other interventions.” , said Professor Hettige.

Students fall behind in online school. Where is the Covid-19 “disaster plan” to catch up with them? Virtual learning could keep children and their families safe during a public health crisis. But it made it exponentially more difficult for them to stay motivated and to learn. Online courses are rich in lectures, repetitive, and devoid of conversation with students. For months, experts hoped that a return to classrooms would allow teachers to fill the gaps in children’s academic and social needs. For many students, this has not happened.

“If a child had started primary school in early 2020, they would soon move into third grade, and let’s say, for example, the pandemic continues for another year; then out of five years before the main exam, four years would have passed ”, underlined Professor Hettige. These children will not have learned the basics of life during the most important and defining periods of their lives. “Going to school is learning to learn; children learn to become more and more independent in terms of learning. When deprived of the human contact and emotional support that children receive in school, both from teachers and from socializing with their peers, their motivation to learn decreases dramatically. Minus that, parents have reported that their school-aged children experience increased mood swings and difficulty regulating their behavior and attention.

A child who spends much of his young age in a well-organized educational institution is more than likely to grow up to be a versatile person with multiple skills, diverse interests, a broad worldview, and widely valued human qualities. On the other hand, Professor Hettige noted that no person should leave school without acquiring at least some of the above attributes that make them fit to function in a modern democratic society, leading a productive and content life, while by contributing to the well-being of fellow citizens in all possible ways.